What Attracts UK Students to the Middle East?

Published by MohammedTahir on February 13, 2020

The market for International Schools in the Middle East continues to grow – there’s a standard of higher education in the region that attracts students from around the world, which goes hand-in-hand with the culture and history of these countries that bring in many students and tourists on a daily basis.

But what makes the Middle East specifically so attractive to UK students?

Students in the UK, especially today, feel the need to branch out and experience new cultures and lifestyles. They’re eager to explore the world of education outside their own homes so that they can expose themselves to other traditions and learn more than just what is taught in the classroom.

Also Read: How to study abroad – different options and tips for students 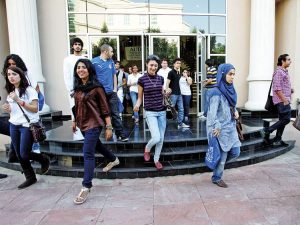 The quality of education has significantly improved in the past decade and now, the Middle East is no stranger to exceeding universities. The UAE itself has its own dedicated branch of the Hult International Business School, while the Weill Cornell Medical College has its own campus in Qatar. German universities have found their homes in the region as well – with the Technical University of Berlin in Egypt and the German University of Technology in Oman. The fact that well-known international universities have decided to open campuses in these countries, showcases the massive potential for education.

Countries such as Qatar take extensive measures to ensure that the standard of education remains at the highest level. Qatar’s Supreme Education Council selects the best schools from around the world and supports them in establishing schools in the country.

The history of education in the Middle East is a bold tale of ambition and accomplishment. The world has seen the region grow in the industry; not only are top universities present, but there’s a wide range of schools that offer international curricula to students. With the implementation of the IGCSE and IB curriculums, the education standards at secondary levels already prove to be a force of nature that help grow education in each country.

Perks of studying in the Middle East 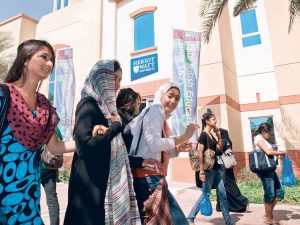 There’s a wealth of ancient history in the region that makes it so compelling to students and tourists alike. In general, the Middle East is a tourism success story like no other. The architectural landmarks of Egypt, Jordan and the UAE are just a few examples as to what brings in people from all over the world – and it’s safe to say that these wonders play a huge role in convincing students in the UK to branch out.

Apart from the geographical diversity, cultural diversity in these countries is so vast and different, encouraging UK students to witness firsthand the opportunities that are unique to the region. Students from the UK have the opportunity to immerse themselves in rich cultures and gain a better understanding of the people that are otherwise portrayed negatively in mainstream media.

These countries attract thousands of tourists on a daily basis because of different contributing factors; the weather, shopping, culture, food to name a few. There’s no doubt that once students are exposed to the wonders of other countries, they look at these options to study further. The natural beauty, advanced technologies and ancient cities are all factors to the region looking attractive to both students and tourists. Students in general look at studying abroad due to their love of travelling and they also believe that this gives them a good edge when it’s time to apply for jobs.

Fazreen Razeek from Edarabia.com has served the digital industry for almost 10 years. He collaborates and works alongside agencies, event organizers, and suppliers to develop and execute their marketing strategies. He is extremely passionate about education technology and also writes for various local and international publications. A graduate with High Distinction from the Edith Cowan University, Perth, Australia, Fazreen holds a Bachelor’s Degree with a double major in Marketing & Management. 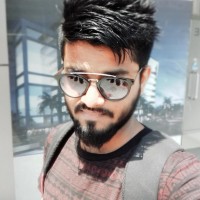 As a digital marketer, SEO lecturer and WordPress developer I support other freelancers and businesses with their websites from helping with the design and blog posts to optimizing them for search engines. I’m the founder of Websitevala and support successful digital marketing companies like ClickDo as a virtual assistant.

As a digital marketer, SEO lecturer and WordPress developer I support other freelancers and businesses with their websites from helping with the design and blog posts to optimizing them for search engines. I’m the founder of Websitevala and support successful digital marketing companies like ClickDo as a virtual assistant.

Other Posts by this Author